Let all the earth fear the Lord; let all the people of the world revere him.  9 For he spoke, and it came to be; he commanded, and it stood firm.  10 The Lord foils the plans of the nations; he thwarts the purposes of the peoples.  11 But the plans of the Lord stand firm forever, the purposes of his heart through all generations. 12 Blessed is the nation whose God is the Lord, the people he chose for his inheritance.  –Psalm 33: 8-12

We hope you saw our mid-October update with photos giving thanks for the successful final closing on our purchase of the large tract of land in middle Chile.  As last month’s photo showed, try to imagine a room full of nine brothers & sisters and other relatives, none of those siblings with more than a sixth-grade education and one not knowing how to read or write, present with a witness on his behalf.  Some of them asked about the necessity of opening a bank account in order to cash their check!  The property will be developed into a camp for children & youth, as well as be equipped as a year-round retreat center and more.  We remain so extremely grateful to the Lord!

We have already applied to EMI, an international ministry of retired Christian architects, engineers, & surveyors who help plan and layout mission projects in countries outside of the U.S.  The application process has gone well and we now await a formal agreement letter from them to put their team of 8-12 persons on alert, hopefully coming to Chile in or around March 2020 to spend one to two weeks on our land in order to produce site plans, etc. to use in the staged development of the property.  Please pray this step forward with us.

We have two photos to show you of a massive protest in Plaza Italia in Santiago two weeks ago and of what was on all Chilean newscasts a couple days later: 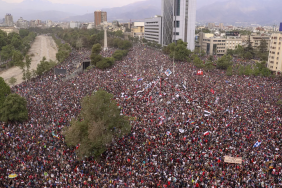 Some of you may be familiar with the vast unrest affecting almost all of the country of Chile at this time.  Street protests (now mostly peaceful), store ransacking, closed banks and schools, and wide-spread military presence are all reality, as enforced curfews and states of emergency in many cities continue, with new lows in the value of the Chilean peso in world markets.  …… this all initiated by an announced increase in metro fares on or about October 16th, from 770 pesos a ride to 800 pesos a ride—roughly a 4% hike (4 U.S. cents).  Youth and delinquents quickly reacted, destroying metro stations and even burning train cars they could get to, causing hundreds of millions of pesos damage.

On the surface, the small fare increase may not seems like much, but to the huge number of lower middle and lower class of Chileans (perhaps close to 80% of the country) who rely solely on public transportation, it was the “last straw” in their struggle to meet daily needs out of a salary of around $550 per month, less the cost of public health insurance and retirement benefits( app. 25%).  The discontent has been long in brewing for a variety of reasons concerning the imbalance between the “haves” and “have nots” in Chile.

The state of peace throughout all major cities of the country can at best be described as fragile.  While we look at promised reforms and changes in the president’s cabinet and in congress, we are reminded by the above Bible passage that only the plans of the Lord stand firm forever, the purposes of his heart through all generations.  Please join us in praying for Chile and for all countries.  NO country (not even Rome in its day) is immune to Chile’s current circumstance.  In the middle of it all, Jesus remains the LIGHT OF THE WORLD!

In ending, we would also like to again invite you all to attend this year’s missionary conference (ICOM) for the Christian Churches/Churches of Christ.  The conference will be held in Kansas City MO. this year between Nov. 14-17, and is definitely worth attending!!  We will be at our “CHILE MISSION” booth and would love to see you there!

OUR BIGGIST GRATITUDE OF THE MONTH??  Jesus Christ is the same yesterday, today, and forever (Hebrews 13:8), and we are called to be his ambassadors to this world!!

Praising, praying, and fasting to our God AS LORD through Jesus, the LIGHT OF THE WORLD,

In his love and GOD unity,